Last July, we provided an assessment of the yearly changes in rice prices and speculated on what the movements revealed about the market conditions in North Korea.

At the same time, we highlighted some of the unknowns. Especially regarding wages and accessibility. There is also the constant question as to how well the prices in Pyongyang, Sinuiju, and Hyesan reflect the rest of the country.

One set of figures that we underscored last year was the U.S. dollar’s purchasing power vis-a-vis rice, which had continued to increase from July 2012 (48.86% increase in Pyongyang, 22.11% in Sinuiju, and 37.14% in Hyesan). We read this growth as an index for the continuing lack of confidence in the Korean People’s Won (KPW) by North Korean consumers.

We took another look at both the rice prices and the purchasing power of the USD this year, hoping to get a better picture of broader trends.

July was initially selected last year because of it falls in the middle of the lean season in the North Korean crop calendar. We believe that conditions now, when food availability would be most strained in the country, best reveals the robustness of the overall food market. 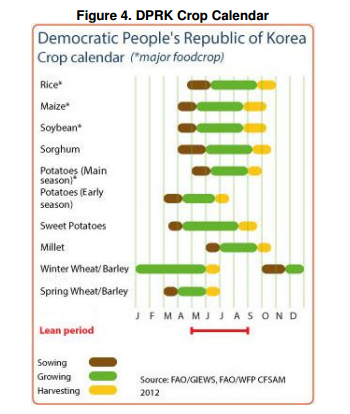 According to the data collected by Daily NK, the nominal price of rice in all three cities fell year-to-year in 2014. Compared to July 2012, the price changed by -21.296% in Pyongyang, -21.081% in Sinuiju, and -14.286% in Hyesan. It is also noteworthy that rice prices in Sinuiju and Hyesan fell to price levels from July 2012 while prices in Pyongyang fell an additional 20.755% compared to that from two years ago. 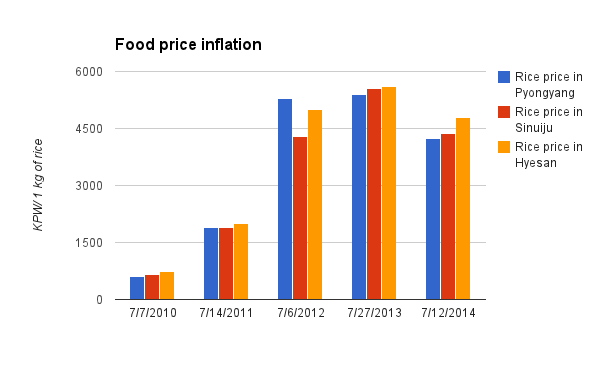 According data from Daily NK

However, these nominal prices do not reflect real purchasing power, so additional data must be examined.

Purchasing power of USD in terms of kg of rice, year-to-year 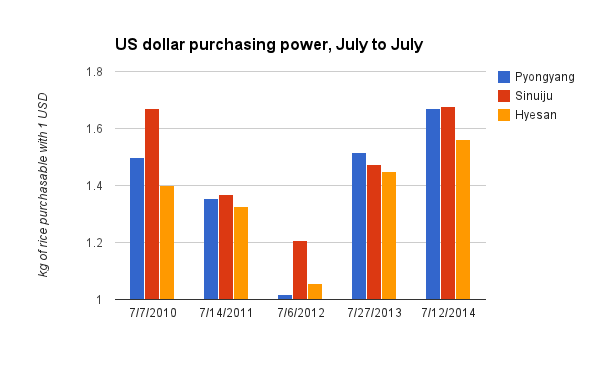 According to data from Daily NK

We examined the purchasing power of foreign exchange in previous articles and consider it a very important indicator of the price stability in the country.

The year-to-year decline in rice prices outpaced the recovery in the KPW’s value and produced an increase in the USD purchasing power vis-a-vis rice prices. Although the purchasing power of the USD had come down from its all time highs between December 2013 and April 2014, the stark difference is visible when we compare figures from 2012.

Although nominal prices of rice had come down to levels from 2012, the increased purchasing power of the USD in the past two years suggests that foreign exchange has become more valuable.

There is still not enough information to affirm what this phenomenon means to food security in the country. However, as we emphasized in the past, the rise in the purchasing power of the USD does not bode well for North Korea. The accessibility of valuable foreign exchange varies from place to place and ultimately harms the powerless. Meanwhile, the drastic decline in nominal prices in Pyongyang may also indicate that resources are continuing to concentrate in the capital.

I develop trade advocacy strategies for a DC-based consulting firm. Studied economic history at the London School of Economics, and can be found on twitter at @ykwon88
View all posts by Yong Kwon →
This entry was posted in Rice and tagged dollar, Exchange Rate, food price, Hyesan, KPW, price volatility, Pyongyang, Sinuiju. Bookmark the permalink.